The Iron Man Mark 50 was first introduced in Avengers: Infinity War. We are about to take you into the journey of Tony Stark (a.k.a Iron Man), created by Marvel Studios. Our new triangular arc reactor symbolizes Tony Stark’s first introduction of the Mark 50 Nano Tech Armour.

The quality is really good and not bad for the price. 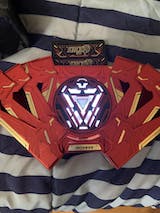 Was worried about spending so much on playing cards. However, once our son opened them and seeing his excitement it was worth it. And they really are very nice cards. The box with the light up arc reactor looks great and makes for an amazing shelf display. These are the perfect gift for a card collector and marvel fan. 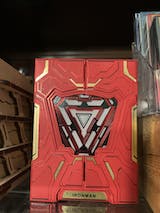 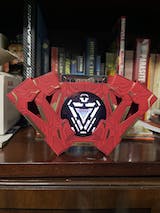 So I didn't realize the case was gonna be made mostly out of cardboard, so when I first opened it, I pulled a little too hard. I thought I'd broken it, but luckily I just had to slip a tab back in a slot and it was fine. Given the intricacy of everything going on here and the light up part and the quality of the actual cards, I guess the price is fair, although it still feels a little much to me for what basically amounts to cardboard. And that was on sale, too. I'd say they're worth the price, especially when you're as obsessed with Iron Man as I am, but if you're not a collector or a huge Iron Man fan I'd say avoid buying them at full price. Overall I'm pretty satisfied. Just be careful opening the case for the first time until you figure out the exact force needed. (Part of the problem is you need more force to disconnect the magnets than you want to finish opening it, which is why I "broke" it the first time. Just be really careful, is what I'm saying.)

Incredible, superlative deck with beautifully detailed details. I am really happy I bought it. Impeccable customer service and fast shipping to Italy. Vary Thanks!

I was surprised at how thin this deck is. Makes for a great handling deck!

Can’t go wrong with the classic combination of red and gold!

Let customers speak for us

The amazing tuck box is probably the first (maybe only) reason you'd buy this deck of cards. The tuck box is absolutely worth it, but the cards themselves amazed me as well. I bought the PVC cards, and they handle way better than I expected them to. Happier with this purchase than I thought I'd be!

Just received my decks today 1 holo and 1 red gilded they will be placed next to the non gilded deck. I have purchased different iron man, both thor, doctor strange, and captain America deck and I got to say these tuck cases are amazing and card mafia takes all my money 🤣. All my decks are unopened because I can't bring my self to open them but CARD MAFIA thank you for the amazing cards!!! 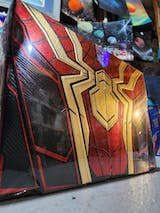 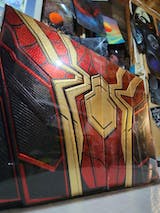 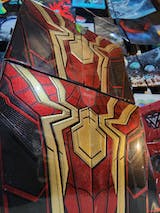 The box alone gets this deck 5 stars. It’s well built and looks great.
The actual deck is even better than I imagined.
The Spider-Man detailing throughout is very well designed and the extra embellishment on the face cards takes it to the next level.
Cards are very well made making this a must have for any Spider-Man fan and an exclkect addition for playing card enthusiasts.

Only question I have is which deck to get next!? 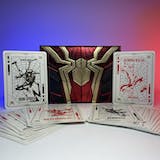 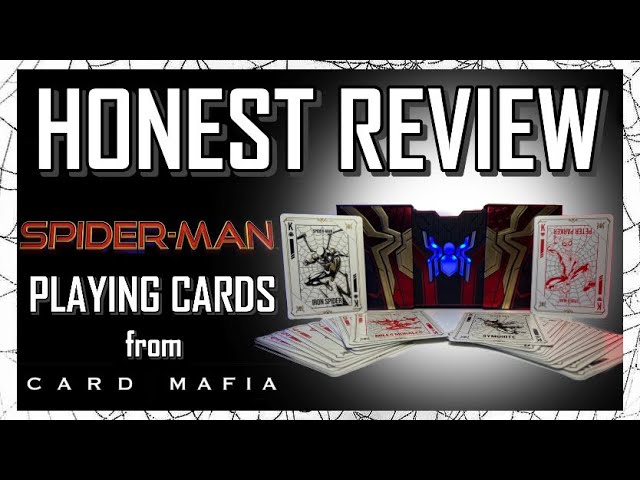 You can't go wrong with these decks! They are so cool...
Really hard to choose between them both so I got both of them!!! 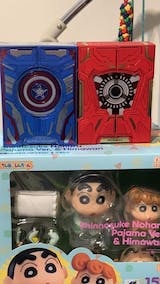 I can begin to express how Beautiful this deck is. The lines and graphics are on point! My deck sadly had a little tear on the board pull out but. I am so exited to place it front and center on my collection display! Thank you much for such a beautiful piece! 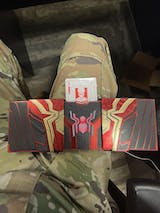 I have purchased all Avengers decks since the first Iron Man deck released. Along with the Captain America deck and the latest MK I deck. Love them all. But the Spiderman deck at least to me is the most special. The design and care put into making the deck case is magnificent. Not to mention the card paper used and art and design of each card. I couldnt be more happy to be one of the first to preorder this Spiderman Deck. Anxiously awaiting the Thor set and future Avengers decks. Card Mafia is simply the best hands down !!!!

The quality is really good and not bad for the price.

Was worried about spending so much on playing cards. However, once our son opened them and seeing his excitement it was worth it. And they really are very nice cards. The box with the light up arc reactor looks great and makes for an amazing shelf display. These are the perfect gift for a card collector and marvel fan.

The box works even better than I imagined and I’m really impressed with how the pvc cards look and feel. The customer service was fantastic and any queries I had were very quickly answered and resolved.